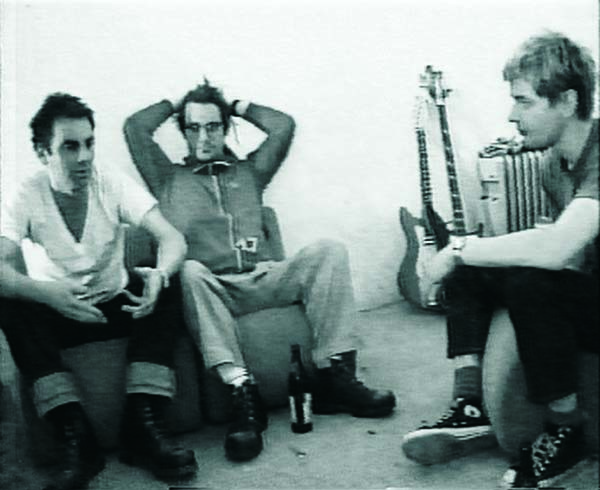 This is a re-working of a piece originally made in 1996. ‘New Wave of New Wave’ depicts the story of three amateur musicians attempting to form a band. Set one evening in a rehearsal room the band has every possibility of achieving their conceptually progressive dreams of sounding like a mixture of the Velvet Underground, the Sex Pistols and Sonic Youth only for everything to fall apart due to a mix up in the band hierarchy.

The new version, titled ‚Divine Intervention/New Wave of New Wave‘ is a re-edited version of the original. I devised the editing system relating to Schoenberg‘s 12-tone method of composition and then arranged the film with direct reference to a piece of music by Hanns Eisler. I first cut my film into 12 scenes, annotating these 12 scenes as the 12 tones of a 12-tone melody row. And taking Eisler‘s melody row from the ‘Kammer Symphonie’ of 1940 – composed for a Canadian public information film on the natural formation and erosion of ice glaciers – I arranged the film sequences in accordance with his melody. The film was then sequentially arranged by way of the four treatments of a 12-tone row formalised by Schoenberg; Prime, Retro, Inverse and Retro/Inverse.