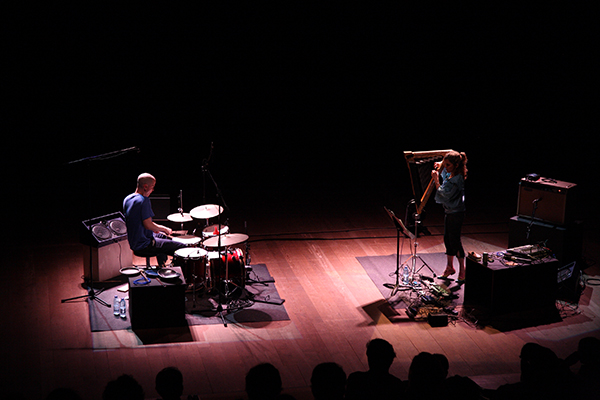 There Comes a Point When the Score is Thrown Away, 2011
Graphic score for musicians Chris Corsano and Zeena Parkins

‘There Comes a Point…’ was constructed in response to an invitation from The Serralves Foundation in Porto to produce a graphic score for Chris Corsano and Zeena Parkins. Daunted by the request to write for two renowned free improvisers I turned to Frederic Rzewski for inspiration and found the answer in an interview he gave for the American Music Series at Yale in 1984. He stated, and please note I paraphrase here, that in performing improv there comes a point when the score is thrown away and the performers improvise as they desire. My approach was a literal extrapolation of Rzewski’s comment. I undertook to act out this scenario – placing a wastepaper basket as far away as one can reasonably throw a paper ball and threw the score, a scrunched up piece of A4 paper, away a number of times. Over the course of 20 minutes I noted the times at which I managed to hit the target.

The piece may be played by any number of musicians and any type of instrumentation. One person should be timekeeper, signalling the times above to the others – dropping a raised arm for instance /or/ each musician should be equipped with a stopwatch. As the times denote when the score is thrown away the musicians should change direction in some manner at these times, dynamically directly or indirectly, in accordance with an agreed system decided upon by the performers before hand.

‘There Comes a Point…’ was commissioned by the Serralves Foundation as part of the series ‘Improvisations / Collaborations’ and originally performed by Chris Corsano and Zeena Parkins at The Serralves Museum for Contemporary Art in Porto on June 12th, 2011.

In October 2014 The Great Learning Orchestra performed ‘There Comes a Point…’ at Marabouparken, Stockholm, as part of the exhibition ‘No Sound is Innocent’. A recording of the performance may be heard here.