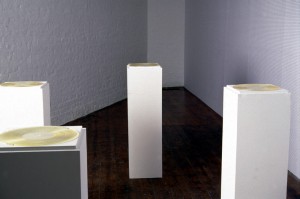 All that is not The Beatles, and therefore not Abbey Road, 2001
Playable negative casts of The Beatles‘ White Album

In 2001 I was working on an exhibition at The Showroom in London. I wanted to include a ‘London’ piece in the show, which was to be a continuation of an ongoing project whereby I make ambient recordings of particular sound studios and concert halls. My first choice was Abbey Road Studios, arguably the most famous studios in the world, mainly due to the fact that the Beatles made the majority of their recordings there. I approached the studios requesting permission to make a recording of the studio‘s ambience. However, the management would not grant me such permission, fearing, I imagine, that I would bootleg and misuse the ‘sound’ and reputation of the studios. Abbey Road Studios have in the past been victim to ingenious bootleggers who have gone on to make considerable profit from their efforts.

Around the same time I had been experimenting with a record making sculpture process – a take on home remixing that focussed the plundering of the recomposed sound(s) obtained on a physical manifestation rather than an extrapolated dub of what was there already – I made my own records from casting other records in epoxy resin. The result is a negative of the original, they play backwards and the stereo channels are out of synch with one another by one groove.

When Abbey Road Studios said no, it occurred to me to bring the two ideas and the incident together and I decided to make a recording of ‘not’ the studio sound. Its metaphorical negative, so to speak. I made negative casts of a recording made there. I chose the Beatles‘ White Album for its infamy and its ambiguity. It is probably the most debated Beatles album. The four Beatles were hardly ever in the studio at the same time during its recording. Barely able to stand each others company, it marked the beginning of the end for The Beatles as a band.